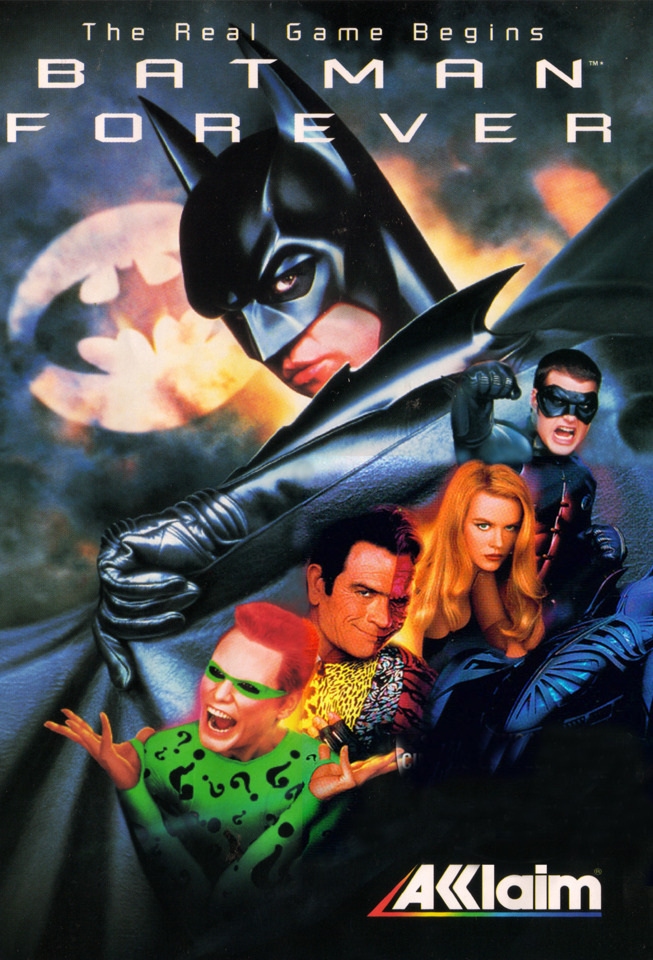 Get all the inside info, cheats, hacks, codes, walkthroughs for Batman Forever on GameSpot.

Played By: Parazzing –
Disclaimer: Most videos by World of Longplays use SaveStates!

A co-op playthrough with me as the goddamn Batman and my bro as Robin. Not worried about getting 100% in stages or anything. We (well, I) just wanted to go through it. I (we?) do try to explore as much of a stage as possible, though. If there were better FAQs or a scan of the game guide, I probably would’ve went for 100%. –
Disclaimer: Most videos by World of Longplays use SaveStates!

Played by: SCHLAUCHI –
Disclaimer: Most videos by World of Longplays use SaveStates!

A playthough of Acclaim’s 1995 license-based beat ’em up for the Super NES, Batman Forever.

Once upon a time, Batman was a paragon of success when it came to games based on popular media licenses. Between Sunsoft and Konami, the caped crusader had a run of unbelievably high quality games on Nintendo platforms that are still typically regarded as classics three decades later.

And then, one day, that all changed.

Batman Forever marked a hugely different tone from what we got with earlier Batman films. No longer sinister and brooding, the new film was gaudy and bright, schizophrenic and unfocused. It was, in my humble opinion, a complete mess – the distinctly anti-Burton production ended up being little more than a ludicrously high-priced menagerie of stars and CG effects. It was fun to watch once, but that was about it. And Batman’s rubber nipples. Seriously, what the hell was that?

In video game land, the Batman license was no longer in Konami’s hands. It had fallen squarely in the lap of Acclaim Studios, and to absolutely nobody’s surprise, it failed miserably.

Batman had effectively conquered action games at this point – his platformers and his beat ’em ups were impeccable. But when the decision was made to create a new brawler, the designers seemed to feel that they needed to start from scratch, despite having a clear, workable template in the phenomenal Batman Returns SNES game.

It seems that instead of going the traditional route (that is, a brawler in the style of Final Fight or Streets of Rage), the decision was made to shoehorn Mortal Kombat’s mechanics into a game that clearly wasn’t meant to be a 1v1 fighting game. It makes the game feel like it was Frankensteined together from disparate pieces that never really go together – I’ve often wondered it was merely a test run for what eventually would become MK Mythologies: Sub-Zero.

The controls are sloppy, laggy, and needlessly complicated. You have to use *every* button, including the select key (?!) to perform basic actions, and the timings for the special move inputs are unintuitive and painfully unforgiving, but they must be learned cold if you’re going to make it very far at all.

The stages are all huge mazes made up of CG rendered backdrops (which do look nice, though a bit generic) that hide bonus items (extra lives, energy), blueprints (for new gadgets), and Riddler boxes (lame puns that hint at secrets), in addition to millions of palette-swapped thugs. The level designs are decent, but the controls make navigating them an exercise in complete frustration – there are only so many times one can miss a ledge and die because Batman’s cape glide didn’t work before crying “Uncle!” and turning it off.

Like like environments, the enemies are all fairly impressively done. They’re repetitive and a bit drab to look at, but for a SNES cart, the small digitized sprites animate fluidly and look clean. The music is also decent… but this was a Tim Follin soundtrack, and it falls woefully short of his usual efforts. The compositions are fine, but the samples sound tinny and thin. The SNES was the master of the fake-orchestra sound, but here everything sounds a bit too cheap and flat.

Oh, and let’s not forget that the game actually features loading screens. Loading times weren’t entirely unheard of on the SNES – Lock On and Street Fighter Alpha 2 both suffered from them, as well – but at every screen transition, Batman Forever grinds to a halt and blazons “HOLD ON” across the screen for several seconds. As if the pace wasn’t plodding enough to begin with.

Given that the game must be completed in a single sitting, you’ll get to endure a solid five-to-ten minutes of loading screens total by the time you’ve finished it.

Overall, I wouldn’t call Batman Forever a complete bust. The idea was alright (though far better realized in MK Mytholgies: SZ, which can be seen here: https://youtu.be/9X0aVSx8fO0 ) and I did occasionally find myself enjoying it, but the punishingly slow speed of the gameplay, the braindead AI, and the screwy controls all will leave you wondering if we were we actually supposed to have fun playing this.

It feels almost masochistic to ask what might’ve been if Konami had retained the license just a little bit longer.

And if this wasn’t enough for you, also be sure to check out my video of the *other* Batman Forever beat ’em up here: https://youtu.be/_–Ft5HVvF4
_____________
No cheats were used during the recording of this video.

NintendoComplete (http://www.nintendocomplete.com/) punches you in the face with in-depth reviews, screenshot archives, and music from classic 8-bit NES games!